On May 1st, 2020, at the height of the COVID-19 pandemic in New York City, Mayor Bill de Blasio and the City Council officially initiated the Open Streets program, with the goal of providing more space for socially distanced recreation. The program closes designated streets throughout the city to vehicular traffic for set hours, and opens them to people.

Many of the Open Streets never flourished, with drivers simply moving aside the barricades, and others fell into disuse when the weather turned cold. However, the 34th Avenue Open Street, which spans the Queens neighborhood of Jackson Heights and borders on Woodside and Corona, continues to thrive.

In a neighborhood that ranks second-to-last in per-capita green space and fifth-to-last in per-capita playground space in the city, 34th Avenue has become a lifeline for some residents. Locals jog, stroll, ride bikes, walk dogs and socialize, without fear of cars. Elders play Bingo and children play hopscotch, while bicycles, tricycles, scooters, skateboards, roller skates and even the occasional pogo stick and unicycle fill the avenue’s two lanes. But it's a space for much more than recreation; it's a space for community connection, a resource for mental relief, and, for some, a means of financial livelihood.

The Department of Transportation has praised 34th Avenue as the gold standard of the Open Streets program, and the volunteers who maintain it were instrumental in the campaign to make it permanent. 34th Avenue is now at the vanguard of a wider movement that prioritizes people over cars and envisions walking and biking as the centerpieces of city streets.

Yet, it is also a site where visions of how public space should be used are clashing. Some want 34th Avenue to serve as a blueprint for city streets, while others object that the closed street exacerbates traffic and other quality of life issues, particularly for elderly and disabled residents who rely on cars. On 34th Avenue we see a harbinger of what post-pandemic New York City may look like, and what it will take to get there: imagination, negotiation and adaptation. 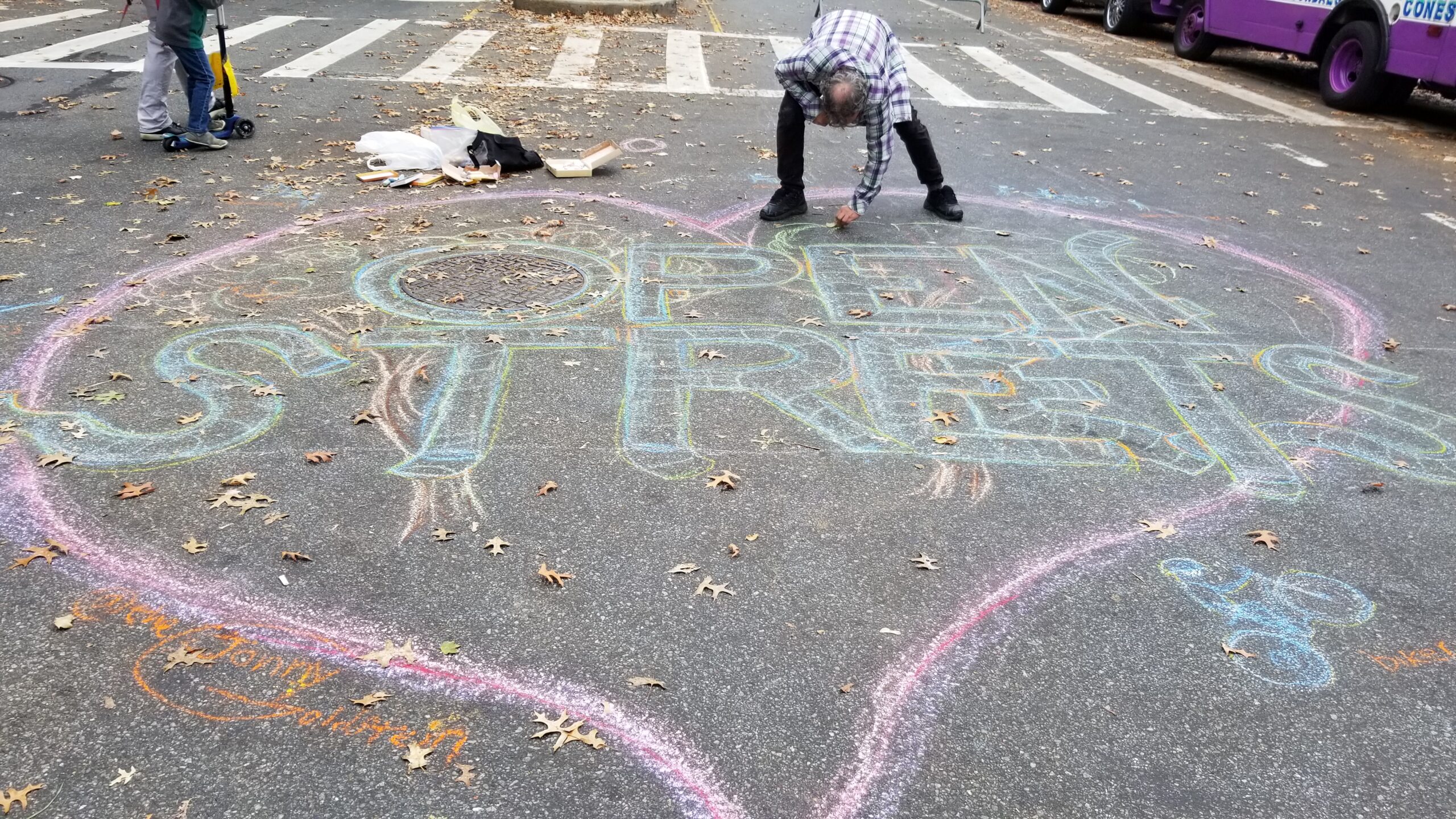 Bridget Bartolini hardly left her apartment in the first two months of the pandemic, when Jackson Heights became the "epicenter of the epicenter." When she started emerging from isolation and walking her local Open Street, she was fascinated by what she saw: chalk art, pilates classes, dance rehearsals, music performances, kids playing. Signs of life and resilience.

An Oral History MA student at Columbia University and Founder of the Five Boro Story Project, Bridget loves talking to people and hearing their neighborhood stories. She began interviewing people about 34th Avenue in the fall of 2020 for a journalism class, and the more she listened to how people are reshaping their lives around this street, the more she wanted to hear. She launched the 34th Avenue Oral History project to document the story of the Open Street as it unfolds.

34th Avenue Oral History is designed to be a longitudinal oral history project. Bridget is in the process of conducting additional interviews and crafting more community member profiles, which will be added to the site. She's also planning free community events with project participants - stay tuned for upcoming events on the Open Street!

This project has been supported by a Public Humanities Grant from Humanities New York, the Humanities in Practice Initiative of the Society of Fellows/Heyman Center for the Humanities at Columbia University, and The Laundromat Project's Creative Action Fund.

Bridget wrote about her research and shared mini profiles in "Story of a Street" in Urban Omnibus.